My name is Doda and I am a passionate and avid Barbie collector (preferably Steffie mold). You can find pictures of my collection, one of a kind doll creations, rare Barbies and accessories, as well as diorama inspirations on my page. My DollFinder shall assist your search for your perfect doll. I want to help you bring your dream doll home! When I was young I only had a few Barbies since my parents could not afford them. Some of my favourites included vintage dolls from the 70ies that my parents' friends had given us as a gift (and which had been played with by their own children). When I was around 8 years old I fell in love with Jewel Secrets Whitney and made a silent promise to myself: "When I grow up, I shall get all the Barbies I always dreamed of." Over 20 years later I can look at a small but solid collection of boxed and unboxed Steffie mold dolls, Barbies and Fashionistas. It gives me enormous joy to photograph and pose my hybrid dolls or create rooms for their doll events. You can find my deboxing videos on Youtube, which mostly show my favourite Barbie dolls, fashions, playsets and accessoires. Let me invite you on a colourful trip into the amazing world of DodaDolls!

January 2021 - You may have seen them in store or online: the blue tubes that promise color reveal fun and mermaids with real hair (no wigs this time!).

In this blog I shall reveal the 100% confirmed European codes that are known to me for all 5 mermaids, some Chelseas and singled out pets from this series.

For more interactive fun, check out my elaborate YouTube video on the topic here: 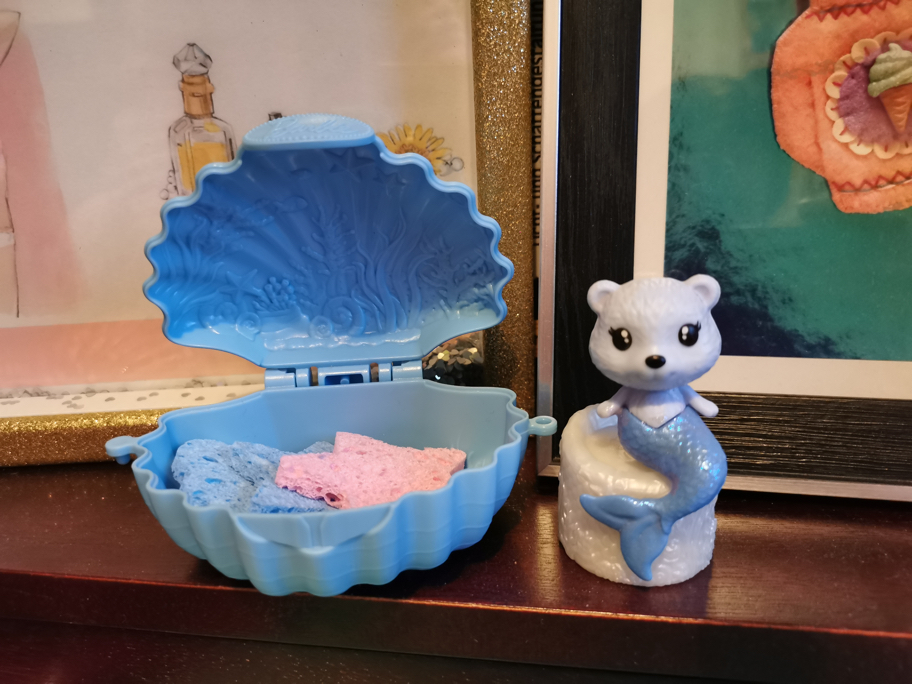 The dolls in their correct order ❤︎

To identify the code, we first have to line up the mermaid dolls in their correct order:

For more in depth information on how to read the codes and figure out the numbering if you spot a middle number that differs from the ones I included here (being the rows of 30s, 40s, 50s and 60s), I highly urge you to watch my video. Numbers of dolls I have not personally unpacked are in brackets. 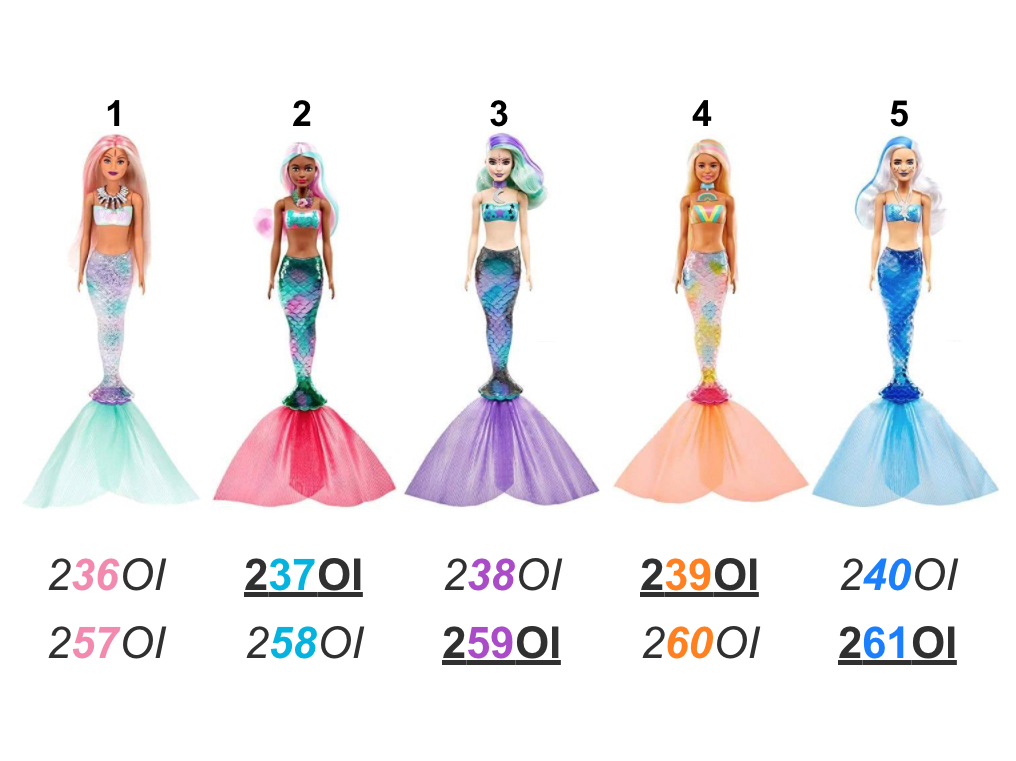 Since the mermaids already burnt a hole into my wallet, I stuck to buying two Chelseas and two pets, which still can give a pretty good hint at the number codes of the rest.

To start off with the pets: the easy way out would be to glimpse to the bottom of the packaging. Usually you can get a feel for the color of the outer shell which pretty much gives away the animal hidden inside. This series comes with 1 magical cat, 2 cutest dogs (frenchies?) and 2 seals.

After the color reveal their mermaid tails glitter heavily, so this is definitely a highlight! The shells are quite decorative (as you can see from the main picture on top of this page), so I definitely recommend snatching them if you can.

The cute Chelseas reveal new colors after a warm bath. Their tails are glittery and partially transparent, which makes for fun play once the water gets trapped inside them. ❤︎ Please be advised that there is only a 100% guarantee of accuracy on the two opened dolls which are underlined. The numbers with a question mark are highly likely, though not confirmed by a purchase. 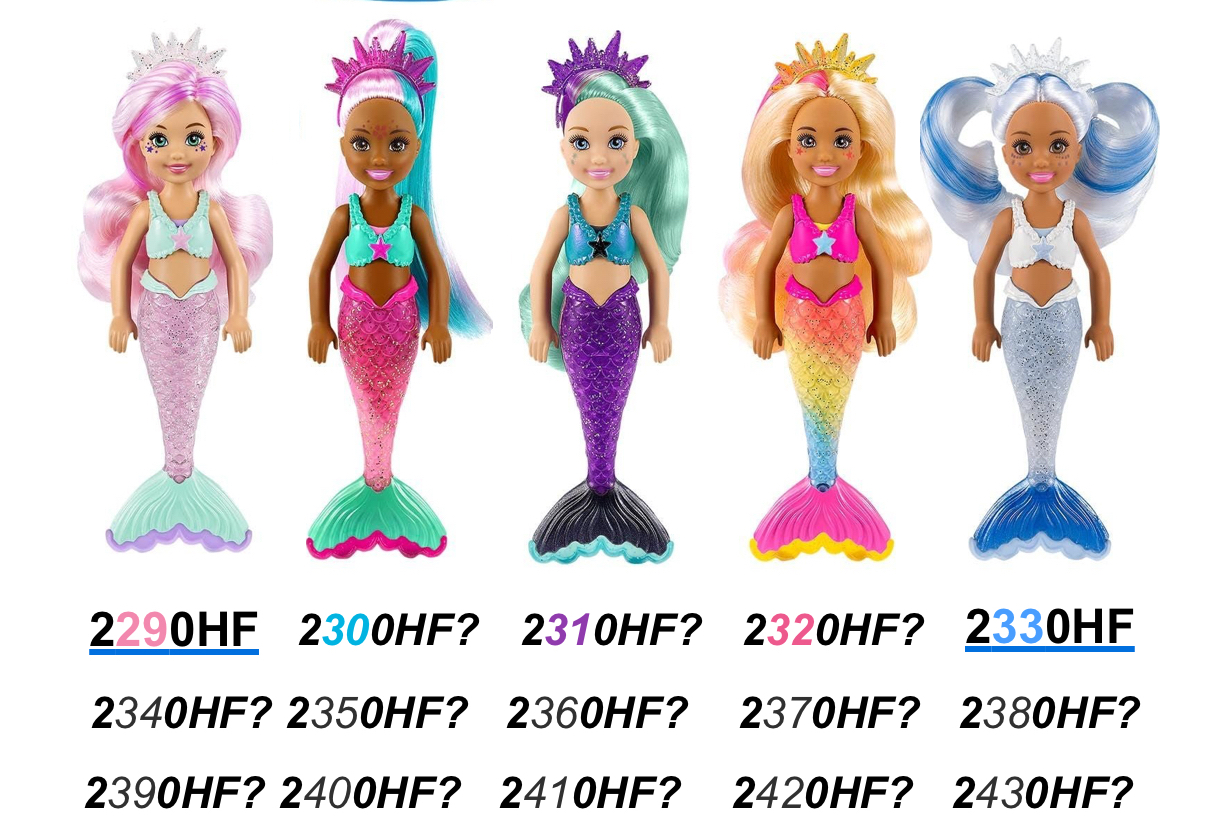